32 Motivational Quotes On Not Giving Up 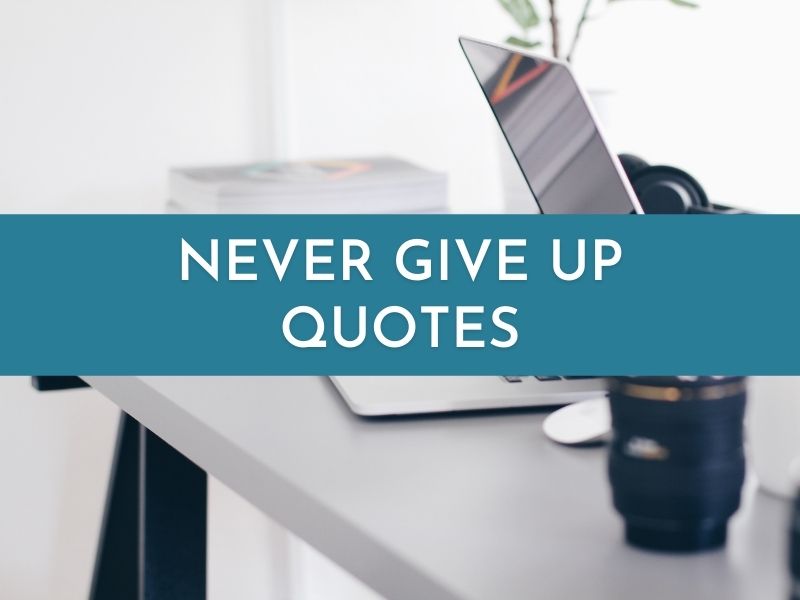 Today, I’ve rounded up 32 quotes on not giving up to remind you that success will not be handed to you on a silver platter.

Many people give up on their dreams and aspirations because of difficulties, societal pressures, or self-doubt. This is why I’ve created this set of not giving up quotes, to inspire you to push through your battles and succeed.

According to this study, 92% of people don’t achieve their ‘New Year Resolution’ goals, with only 8% actually achieving them.

32 Quotes About Not Giving Up

1. “Anyone can give up; it is the easiest thing in the world to do. But to hold it together when everyone would expect you to fall apart, now that is true strength.” – Chris Bradford

2. “Any day that we don’t give up puts us one day closer to success!” – Joyce Meyer

4. “My message is to never quit, never give up. When you have a little trouble here and there, just keep fighting. In the end, it will pay off.” – Gabby Douglas

6. “It takes a dream to get started, desire to keep going, and determination to finish.” – Eddie Harris, Jr.

7. “You just can’t beat the person who never gives up.” – Babe Ruth

8. “Put your head down and work hard. Never wait for things to happen, make them happen for yourself through hard graft and not giving up.” – Gordon Ramsay

9. “It does not matter how slowly you go as long as you do not stop.” – Confucius

11. “Don’t give up. There are too many nay-sayers out there who will try to discourage you. Don’t listen to them. The only one who can make you give up is yourself.” – Sidney Sheldon

12. “Just don’t give up trying to do what you really want to do.” – Ella Fitzgerald

13. “Success is a pile of failure that you are standing on.” – Dave Ramsey

14. “Never give up, for that is just the place and time that the tide will turn.” – Harriet Beecher Stowe

15. “Keep on going, and the chances are that you will stumble on something, perhaps when you are least expecting it. I never heard of anyone ever stumbling on something sitting down.” – Charles F. Kettering

16. “There are no shortcuts to any place worth going.” – Beverly Sills

17. “When you feel like giving up, remember why you held on for so long in the first place.” – Unknown

19. “I never give up. Doesn’t matter what the score is.” – Caroline Wozniacki

20. “No matter what responses you get from your work, you have to be determined not to give up on your dreams!” – Coco Jones

22. “I realized early on that success was tied to not giving up.” – Harrison Ford

23. “Being defeated is often a temporary condition. Giving up is what makes it permanent.” – Marilyn Vos Savant

24. “If you run into a wall, don’t turn around and give up. Figure out how to climb it.” – Michael Jordan

25. “Anybody can quit. Only a real champion and a person of character and strength can keep going and refuse to give up.” – Sadie Robertson

26. “Success is not final, failure is not fatal: it is the courage to continue that counts.” – Winston Churchill

27. “A failure is not always a mistake, it may simply be the best one can do under the circumstances. The real mistake is to stop trying.” – B. F. Skinner

28. “Most of the important things in the world have been accomplished by people who have kept on trying when there seemed to be no hope at all.” – Dale Carnegie

29. “I learned to focus and work hard and not give up. I learned that every obstacle is really an opportunity.” – Jenna Ushkowitz

30. “A champion is simply someone who did not give up when he wanted to.” – Tom Landry

31. “Many of life’s failures are people who did not realize how close they were to success when they gave up.” – Thomas Edison

32. “Never give up on what you really want to do. The person with big dreams is more powerful than the one with all the facts.” – H. Jackson Brown, Jr.

Which one of these quotes is your favorite?