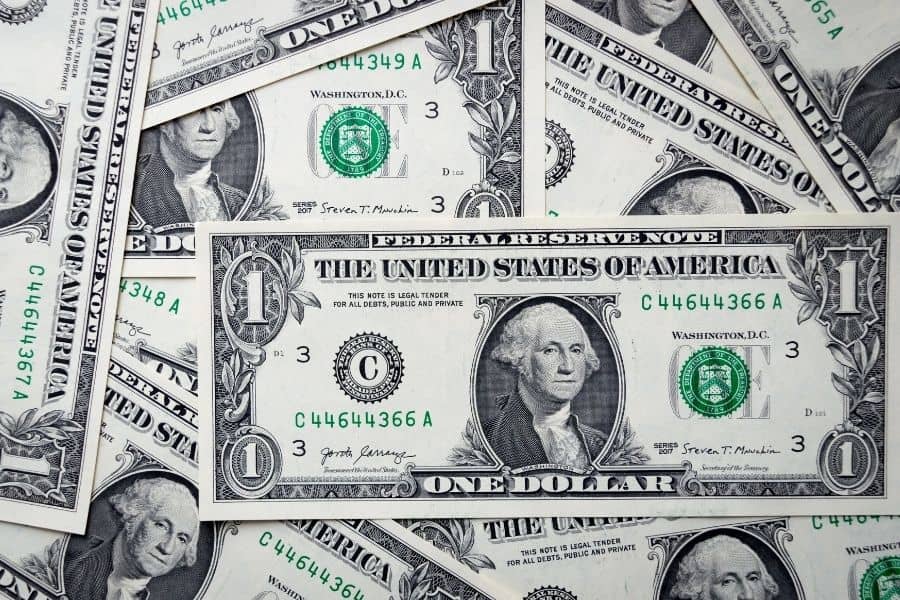 Are you wondering about the question: is $2000 a lot of money? This article will explore that question and recommend what to do if you have 2000 dollars saved.

To answer this question as quickly as possible, no, $2000 isn’t a lot of money. While it is a good starting point for your saving or investing journey, 2000 dollars will barely cover two months of living expenses for a person living by themselves.

Expenses like rent, utilities, food, healthcare, subscriptions, and transportation can quickly consume that $2000 figure. So while it is a great number to start with, it isn’t a lot of money in most situations.

Without trying to deter you or ruin that milestone, I’ll help you understand what $2000 can buy and what I recommend you do to maximize it to its full potential.

Just a heads up, the currency I’m speaking about is USD.

So, is $2000 a lot of money? Not really, but it also can be in many circumstances. I know that’s a confusing answer, but hear me out.

$2000 will not cover two months of living expenses for the average American.

This is because the average rent of a one-bedroom apartment is $960 a month. Pair that with other living expenses like utilities, food, healthcare, and transportation. You can see how that amount can quickly be used.

But, on the bright side, if you have $2000 saved up, you’re doing better than the large majority of the population.

Just a reminder to take my advice/opinion with a grain of salt. $2000 is a significant figure to reach, and I don’t want this article to make you feel bad or feel like it isn’t a good achievement.

Regardless of what I’ve just said, $2000 is still a significant number to reach in your savings.

Saving $2000 has likely taught you how to be more responsible with your money and the self-control not to spend large quantities of it.

I was ecstatic when I hit $2000 in savings, but I wanted to keep going higher and higher! Hopefully, you’re ready to aim for $3K soon too. 😊

Now, if you’re wondering: is $2000 a lot of money? Here are a few examples of what that amount can buy.

Hopefully, these five ideas have given you a look into what you can buy for $2000. Now, I’ll actually get into what I recommend you do with 2000 dollars.

PS: It doesn’t include spending it all at once. 🤣

Now that we’ve established that $2K isn’t a lot of money, but it’s still a great place to start, we’ll now talk about what you should do with it.

If you have this amount saved after your living expenses have been paid, here are four ideas I’d recommend you do with your money.

The first strategy I’d recommend with your 2000 dollars is to save it in a high-yield savings account.

So, instead of spending the money, why not keep it saved and try to reach your next target of $3000.

I know it’s a boring strategy, but it’s the safest option, and you’ll be thankful for it in years to come.

If you’re unsure where to start, check out the best high-yield savings accounts in 2022.

I’m a massive fan of learning new skills, and I think video courses are a great way to learn a ton of information.

Look, I’m not trying to sell you any courses, but there are millions of courses that can teach you about any or everything.

You could also invest in a platform like Skillshare that has over 10,000 video courses from respected teachers and professionals.

Instead of spending the money aimlessly, it’d be a great idea to spend it learning a new skill or profession.

Also, suppose you’re more of a practical learner. In that case, you could use this money to buy supplies needed for the skill, like a new camera or art brushes, for example.

When I was learning photography, I started with a $75 Panasonic Lumix camera and gradually upgraded to a full-frame camera.

You don’t need to invest considerable amounts initially. Just experiment with the cheaper options until you know that you genuinely love the skill and would be happy to invest more time and money into it.

Another thing I’d do with 2000 dollars is start investing. Investing is an excellent way to compound your money over time and earn passive income.

While I’m definitely not an expert, I’ve been able to earn over $800 in the past year from my investments.

Although I’m making returns on my investments, it isn’t physical money that I can spend.

See, with investing, you have to be in it for the long haul, and you can’t expect it to be a get-rich-quick scheme. I’m happy to keep all the investments I currently own in the account for 30+ years.

So while I’m technically making money, I keep it in the investments and let that money compound over time.

Anyways, now that you briefly understand investing, I believe $2000 is an excellent amount to start with.

It’s also capable of setting you up for a financially free future.

That’s simply the power of compound interest and time.

The last strategy I’d recommend doing with your money is starting a business. To begin with, $2000 is an exceptional amount, and you can surprisingly get a lot done with that amount.

While I’m not talking about a physical business, like a storefront, I’m more talking about creating a blog or YouTube channel. This is because they’re pretty cheap without much risk involved.

Bloggers can earn six to seven figures a year, and YouTuber’s can make even more.

While both paths require hard work and perseverance, the $2000 could be used as a supplemental income when starting on either platform.

Starting a blog has been one of the most rewarding things I’ve ever done, and while I’m nowhere near close to earning a full-time income, it’s been worth it due to the amount I’ve learned in 8 months.

You could also start an Etsy business, sell artwork on Instagram, or do commission pieces. You just have to be creative and think outside of the box.

Read next: How to Start a Profitable Blog in 2022

While we’ve already established that 2000 dollars isn’t much money, it’s a great starting point for your savings and finance journey.

When I hit $2000 in savings, I was over the moon. So give yourself a pat on the back if you’ve reached this savings goal.

Remember, you can use the $2000 in various ways, like saving it, learning a new skill, investing it, or starting your own business. The choice is entirely up to you!